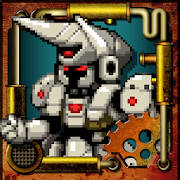 A creeping plot by a massive organization involving powerful Summoned Armor begins to threaten the world! A fantasy RPG of light and darkness where illusions clash!

One day, the bounty hunter Raya happens to free a young man, Theo, from his bandit captors. Theo ventures out together with the strong-minded Raya, but they soon find themselves dragged into a giant plot, forcing them to confront the Cult of Arshedd and the Empire of Galvaris!

Powerful Summoned Armor
Summoned Armor are intimidating, powerful weapons that are summoned and worn during battle. Players can freely customize their Summoned Armor with parts that increase their abilities and add new attacks.

Acquire Licenses and Change Classes
Use Class Licenses found in shops and around the world to change the class of your characters. Each class has unique battle commands and abilities, and changing a character’s class also changes their appearance.