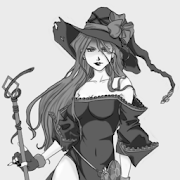 Knight of Heaven: Finding Light is a tribute to the classics – relive the era of 8bit dungeon crawling, monster-slaying, and treasure looting! Features:

-Grayscale pixel graphics and 8bit audio SFX
-Classic turn-based RPG gameplay
-Hundreds of weapons to loot, monsters to slay, and many bosses to overcome and dungeons to explore!
-Make a party of four from six heroes, craft potions and elixirs and gain spells and techniques from equipment and spell orbs
-Three difficulty modes for casual players and RPG veterans
-Offline gameplay with no ads or in-app purchases

As monsters and miasma poured forth from the Black Tower, heroes Mari and Abbie climbed the tower and defeated its master, the wizard Morgoth. Two years later, Abbie vanished. At the same time, a towering spire emerged, stretching from the ocean’s depths to beyond the sky. “Heaven’s Door”, as some called it, caused the oceans to flood, submerging cities, kingdoms, and even entire continents.

Finding Light follows the tale of Mari and her quest to find her beloved partner Abbie and solve the mystery of Heaven’s Door. Joined by the wise cleric Keller, the former knight Stray and Malady the witch, Mari must travel beyond the sky, through the ocean’s depths, and under deep underground dungeons to find the entrance to Heaven’s Door and find her partner before the world succumbs to darkness.