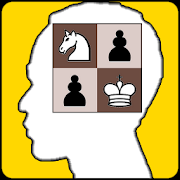 This app is the only one on the Android market to calculate your score for each position and then use it for training to target your weaknesses. It’s also the only application with a built-in chess engine that helps you find the best moves for your openings.

The concept of this application is to learn only ONE move per position and be prepared for ALL possible responses from your opponent. This allows certain variations, but these variations will always come from the opponent’s side. Your best move is the one that, in your opinion, is the best of all possible moves, from of all possible variations, for a given position. The idea is to always follow familiar paths on known terrain to avoid ending up in an uncomfortable position.

♚ Ability to create folders and segregate openings in an organized way.

♚ Built-In chess engine (Stockfish) to help you find the best moves for your openings!

♚ Optionally resume playing against the chess engine when you reach the last position of an opening line.

♚ Automatic identification of your openings using the encyclopedia of openings (ECO).

Start training in just a few steps:
– Create an opening for White or Black that you want to include in your repertoire.
– Enter your best move manually for each position.
– Enter your moves automatically by importing a PGN database file (* see notes below).
– Use the chess engine to find the best moves for your openings.
– Enter the opponent’s most expected moves, and follow with your best move for each position.
– Optionally enter the probability of occurrence (low, normal, high) of each possible move of the opponent.
– Optionally enter a tag name (or comment) for a given position in order to help you memorize a position or a move to play during training.
– When you are ready, train against your repertoire.
– When you train, your score for the current position is displayed, giving you an instant snapshot of your success level for that position.
– Possibility to backup your repertoire, restore it on another device, or share it with your friends!

As you train, your good and bad moves are compiled and automatically saved.
Your personal rating score is displayed for each opening.
A rating score is also computed for each move of your repertoire, giving you an immediate picture of where your weaknesses are.

Additional features:
– A long press on the chessboard will copy the FEN to the clipboard.

Notes:
(*)
1) PGN import is limited to 8 moves per game in free version
2) A PGN database file is a sequential collection of one or more PGN games with or without variations.
3) The program Stockfish is responsible for the intelligence of the chess play and can be found here:
https://stockfishchess.org/
The Chess Repertoire Trainer user interface and the Stockfish chess engine are strictly separated.