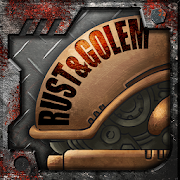 Become a Bounty Hunter and track down Bounty Targets on a Golem!

Smell the scent of oil and rusting metal!

Jink makes his living riding Golems, battle weapons operating on ‘Edea’, to hunt down Bounty Targets in the Commune of Bista. Attempting to track down the truth about the mysterious ‘Edea Banishes’ which destroyed his hometown, one day, he meets Nao, a young woman who says to be a researcher of ‘Edea’ and to know who is responsible for causing the ‘Edea Banishes’. Jink finds himself caught up in a series of events which threaten to engulf the whole world…

Great allies, each with their own personalities!
The game features a wide range of allies- a mechanic, a researcher, Dolls, and even a cat- and all of them have their own distinct personalities and habits.
Work with them to find the truth behind the ambitions and desires that swirl through the story.

Customize your Golems!
You can remodel your Golem, load it with Shells, and change its equipment.
Create your very own custom Golems, ready to defeat even the strongest enemies!