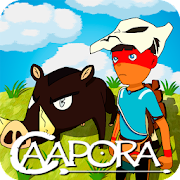 A long time ago, the world was ruled by a constant conflict between the mythological and human world. But one day, a very powerful shaman called Tamand arises and sealed the peace between these two worlds by closing the portal through a holy stone called Caapora.

Since then, this stone has been protected for years by elemental guardians created from the power of Caapora. Some years later, the holy stone was broken up by a renegade Shaman called Ojibe and was fragmented into four parts that were spread throughout the continent of Zaltana. Since then, chaos and darkness have once again hovered over the human world and the mythological creatures and entities, such as Boitatá, Yara, Mapinguari, Caipora(Curupira) e Mula sem cabeça, returned to inhabited their world.

Help Yacamin to restore the peace between the two worlds again!