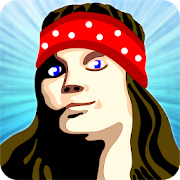 Put on your leather jacket, grab your guitar and lead your band to success in this management game filled with attitude!

”My mind is not as clear as it used to be, but I believe it was 1965 when we started. Our manager was a pretty peculiar fellow, ’cause we never even saw him (or was it her?) in person. Instead, we got our orders through some kind of mobile device. It felt strange at first, but it worked well.

Our days were filled with typical band activities: we made albums, toured, went to interviews, performed on TV, and trained relentlessly. We learned various different skills and spent our hard-earned cash on items that helped us on our journey. Occasionally we had to prove our worth by facing other bands in a Battle of the Bands contest.

We used to experiment a lot, trying different styles of music. There were plenty of genres to choose from, and each one gave us sort of special powers. We even founded a couple of genres ourselves.

During the first years, we had this underground thing going on. We had a nasty reputation and lots of loyal fans. But as our fame grew, people started accusing us of selling out, and little by little our music became more mainstream. We developed a line of merchandise, and money started pouring in. Eventually, we even had our very own record label, and we started producing albums for other bands.

Everything didn’t always go smoothly, and we sure had our share of problems. Our bassist was a heavy drinker and spent a lot of time in rehab. We also had to kick out our original singer because his attitude towards the rest of us became unbearable, and we grew tired of fighting with him.