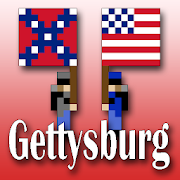 The Confederacy is invading the North, and you will choose whether to command the Southern or Union armies to victory in the farmlands of Pennsylvania. Easy to play and difficult to master, Pixel Soldiers is a game for wargamers and casual gamers alike.

BATTLES
You will desperately attempt to hold or seize the high ground around Gettysburg. Pixel Soldiers Gettysburg includes the following scenarios that can be played as either the Union or the Confederacy…