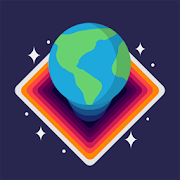 Stay in orbit while avoiding obstacles or being sucked into a black hole. Survive as long as you can while dodging and weaving between the various obstacles, the closer you orbit to the center; the faster you achieve points. The longer you last, the harder it gets. Good Luck and have fun playing with gravity!

An endless, fast-paced and challenging arcade-style gameplay that constantly gets harder

In game translation available in 25 Languages

The in-game audio/SFX was provided by my mouth making noises into a crumby consumer mic, and some royalty free SFX from FreeSFX