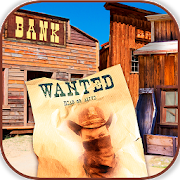 You’re a struggling bounty hunter who’s about to quit his career. You’re tired of not only being unable to provide for your family in the way you wished, but also of being your friends’ all-around joke.

Just when you thought your luck would never change, it comes to your attention that a loot from the West’s biggest outlaw – Mad Dog Black Jack- that contains gold, jewels, and gemstones is hidden near an old abandoned mine town on which you grew up.

However, it is also said that over this treasure lies a terrible curse that ensures a terrible fate to anyone who gets ahold of it. Luckily for you, you’re a man who doesn’t believe in such things and you think that an outlaw probably came up with the curse to scare bounty hunters like you off.

So you decide to give yourself one last chance and move on to undertake the search for this cursed treasure. After all the bad luck that has haunted you, nothing could get any worse. Or can it?