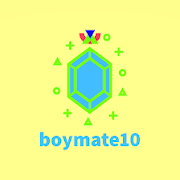 Boymate10 uses the scoring system of the bar10n game created with a very special scoring system.
The game has been recreated in a simpler and more understandable design to support young people more.

Boymate10 is a fun, useful game that has universal, intelligence-enhancing features.
Everyone likes their simple rules and understandable style of playing.

In addition to being a deep and expert scoring system; The player, who is not familiar with the scoring system, is a game where he can easily achieve successful results with a little luck by paying attention to a few rules.

Although Boymate10 is based on an easy design for teens, it can play the game in any age range.
Those who want to specialize in the game can additionally get help from within the application and the site.

The game consists of 54 special mathematically designed shaped cards.
And each card is written on the game-specific point value.
With this system that makes the game understandable and beautiful, the importance given to mathematical thinking is increasing.
In addition, the game is enriched by scoring consisting of special combinations of cards that require strategy formation.

In the game, 34 cards are distributed to the parties, 17 cards, and 20 cards are left on the floor.
After 3 cards are strategically selected and discarded, a card comes from the ground and the game lasts 9 hands.

In the game, each hand earns plus 50 hand points during the first 8 hands with a high number of cards.

The final hand score is a surprise and 150 points.
The player with a high total score of 9 hands wins.
Additional points of the game determined by special coefficients are also calculated and written on the leaderboard.
Systemic and mathematical thinking discipline gives decision-making and intuitive thinking ability to the player of this game.
The memory of those who play also strengthens.
In addition, the people who play, get away from stress and have a fun time as a result of the exercises that develop intelligence.
It is a game that players who want to improve the skills gained by mathematics can play without being bored for a long time by having fun.
Discover the game without waiting, boymate10 opens its doors to everyone.