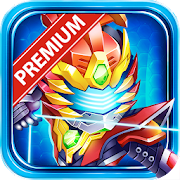 Superhero Armor is a new superhero offline game about robot wars with the main characters are the superheroes coming out of cartoon comics such as fly superheroes. Choose your favorite superhero for street fights battle. Each superhero will have unique powers and weapons, choose your favorite superhero, and join the battles. You will be interested in using powerful weapons to fight off injustice, gain justice rescue the city and become the champion in the robot fighting.

The aggression of the enemy such as robot monsters, robot cars, and their defenders with equally powerful weapons creates a tough and challenging robot war. The battle between superheroes and monsters seems never to end. Fight for justice and rescue the cities that are occupied by aliens. Become a warrior use sword and gun with supernatural ultra powers to defeat all the monsters.
Are you ready to reincarnate and become superheroes, robot warriors, and become legendary bots?

Features of offline game Superhero Armor:
– Enjoy the superhero action game, exciting hack & slash action RPG offline game with an extreme skill. You will be free to choose your favorite superhero.
– Attractive graphics with strong street fight style, diverse and attractive scenes
– A classic role-playing game with superheroes, each superhero has unique skills and powerful weapons.
– Enemies are monsters who have different types of diverse skills and create excitement and drama through each game screen from robot blade, bots car to giant stone man.
– Complete missions to earn bonuses, gems, and diamonds.
– Each superhero has unique skills and powerful weapons.

Play the offline game Superhero Armor to become a true superhero and prove your strength. Completely free to play and installed, you will be really excited and immersed in this new action game hero street fight style extremely attractive. Are you still hesitate? Fight monsters, fight off injustice, gain justice, rescue the city, and become the rangers in the Superhero Armor robot fighting.