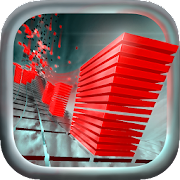 Storm Rush is an endless test of speed, skill, and concentration.

Easy to learn, hard to master, impossible to put down. Storm Rush places you on a never-ending road that is created before your eyes.

Move left and right to dodge the glowing neon towers. Or crash and watch as the world explodes spectacularly.

Check out Rush Mode. Storm Rush has got even faster! Race against the clock to reach the next gate. Watch out for the neon towers; a crash won’t end your race but it’ll definitely slow you down.

Test your reaction speed in all-new Arcade Mode! Collect points as you race through the storm and watch out for score multipliers, invincibility shields, and extra lives. Will you risk a crash to get that extra bonus? Do you have the skill to reach the next gate?

Storm Rush is fast. It’s very fast! In each game mode, you must race between gates while dodging glowing neon towers. Use your skill to dodge left and dodge right as fast as you can. The further that you race the faster Storm Rush gets and the faster you must dodge as you chase the storm. Will you be fast enough?

Storm Rush has amazing graphics. Watch as an endless, mirrored road and glowing neon towers are created as you sprint past. But don’t risk losing your focus as you sprint between the gates, one crash could end your race! See how the storm is reflected in the road as you speed along and how the world warps and blurs as you sprint through the neon gates towards your next challenge. And when your race is over, whether through a time-out or a crash, watch as the road and neon towers explode into thousands of pieces before re-forming, ready for the next race!

It takes amazing skill to succeed when playing Storm Rush. The chase builds up to an incredible speed as you sprint through the gate after gate. However, the controls are incredibly simple – no skill required! Simply touch the left side of the screen to dodge left and touch the right side of the screen to dodge right. The controls may be simple but you must be fast and the more gates you pass the faster you must be! Are you fast enough? Do you have the skill?

As if the incredible speed of Storm Rush was not enough, make sure you watch out for the flashing towers. When the towers flash they are about to move! The neon towers are placed in regular patterns and with enough focus, you will start to spot the patterns in the endless race. But, just as you think you are getting used to the patterns of the static towers the movement will throw up a new challenge. The neon towers will flash just as you reach them and then begin to move into a new pattern. Keep your focus and prepare to dodge quickly to avoid a crash!

Storm Rush begins on a flat road but it doesn’t stay flat for long as the endless road races along. The road twists and turns, loops and splits as you chase the storm. Be sure to keep your focus and use your skill to navigate the endless changes of direction or risk a race-ending crash!

Our focus when building Storm Rush was to create a game that was easy to understand, simple to play, an incredible skill challenge and that had amazing graphics. We hope that you like what we have made. Chase the storm!