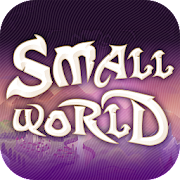 Take control of the dwarfs, wizards, amazons, giants, orcs, or even humans. Then send out your troops to battle mercilessly and conquer new regions. Make shrewd use of the special powers of your races to expand your empire and win the game! Meanwhile, weaker civilizations will be ruthlessly chased out of this Small World! Carve out your place in a world that’s too small to accommodate everyone!

This game of strategy and conquest can be played over and over again thanks to the nearly endless combinations of races and special powers. Whether you’re a newbie or an experienced player, you’ll love playing this classic board game with simple rules and tactical gameplay.

Features:
• MULTI AWARD-WINNING BOARD GAME: a digital adaptation of the award-winning board game that won the prestigious, Spiel des Jahres prize
• HEROIC FANTASY: a heroic fantasy world full of humor with 14 Races and 20 Special Powers
• ACCESSIBLE: accessible and tactical gameplay
• SOLO: play solo against the AI. Games of one to five players
• ONLINE MULTIPLAYER: challenge your friends or other players around the world
• LOCAL MULTIPLAYER: play with other people in the room by connecting to the same Wi-Fi network.
• EXCLUSIVE BOARDS: discover exclusive boards for 3, 4 or 5 players
• EXPANSIONS: Enhance the game with new 28 Races & Special Powers to discover in the expansions: Cursed!, Grand Dames, Be Not Afraid… and Royal Bonus, available in the game shop.
IDENTICAL RULES to the original board game but with the BENEFITS OF DIGITAL:
• A tutorial to make learning the rules easy
• Automatic point-scoring
• Play anywhere, anytime with family, friends, or other players around the world.