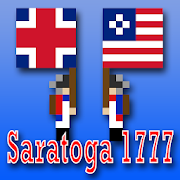 1777, the year with three gallows in it, and perhaps the most crucial year of the American War for Independence. The British sought to control the Hudson River valley and crush the colonial insurrection.

The campaign was a failure, and in the end, British General John Burgoyne was forced to surrender to the Americans. Having proven capable of striking a mighty blow against an Empire that the sun did not set on, victory at Saratoga convinced the French to support the rebels and enter the war. It was the beginning of the end for British rule over the thirteen colonies.

How will you fare?

Fight for Crown or Colony in Pixel Soldiers: Saratoga, the next great wargame from Jolly Pixel in the acclaimed Pixel Soldiers series (Bull Run, Gettysburg, Waterloo, and The Great War)!

Saratoga is a turn-based strategy/war game that features addictive gameplay that’s casual enough to pick up and play while still featuring plenty of depth. With a robust AI, seven scenarios, and a sandbox mode for never-ending war, Saratoga feels like a full-featured PC game shrunk down to fit in your pocket.

Saratoga features seven scenarios, mostly based on historical battles. Some battles have been tweaked for playability, with battles ranging from small to huge.