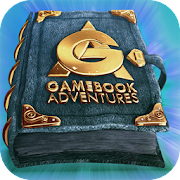 Containing THREE titles from the critically acclaimed interactive fantasy gamebook series in which you, the reader, control the direction of the story! Along with a realistic dice-based battle system to fight creatures, a great story, and beautiful artwork, Gamebook Adventures Collected will give you many hours of gamebook adventuring!

Revenant Rising – “The mighty city of Falavia, the military backbone of Orlandes, is under attack from an army lead by a man claiming to be a God. How did this come to pass you ask yourself? You’re sure it all started as some innocent adventure in search of treasure but somehow it turned into a nightmare. Also, why are people staring at you strangely? It’s not as if you look like you’ve recently been brought back from the dead or something. Oh yes, that’s right. You remember now… ”

Catacombs of the Undercity – “Captured by one of Orlandes City’s most infamous brotherhoods, the Red Hand Guild, you are thrown to the mercy of the subterranean world deep beneath the streets of the great capital. Wading through the sewers and other dark menacing places, your goal is to reach Undercity, the City beneath the City! Only there can you find the help you need to escape this underground horror and bring down the dark brotherhood from within.”

The Wizard from Tarnath Tor – “Two hundred years ago, the legendary City of Tarnath Tor was destroyed as it’s defenders, the mighty wizards valiantly tried to repel an orc horde. Now just a place set within stories and myths, it has been lost to the outside world. A chance encounter with one who claims to be a time traveler sends you on a mission to recover some magical artifacts. This search will lead you to great ruins and the dark forces who have made it their home. Who is this wizard from Tarnath Tor and how can you trust him?”