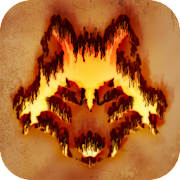 From Herbie Brennan, the author of the GrailQuest series comes to The Complete Sagas of Fire*Wolf! Exiled from his Barbarian village, Fire*Wolf sets out into the Wilderness. On the way, he will encounter many dangers and learn the truth behind his heritage. Growing from a simple barbarian to a skilled sorcerer, Fire*Wolf will not only have to survive personal danger but thwart the greatest threat Harn has ever had to face… The Demonspawn.

J.H. Brennan, known also as “Herbie” Brennan, is an author of over 100 fiction and non-fiction books for adults, teens, and children. Herbie has also designed and written a number of RPGs and gamebooks and is best known for his GrailQuest series published during the mid-1980s. Tin Man Games will be bringing GrailQuest to digital platforms in 2015.

• Four gamebooks – one app! Journey across Harn from start to finish!
• Wield the mighty Doombringer – a powerful sword which steals foes’ life and transfers it to you!
• Gain experience through combat and customize Fire*Wolf’s stat upgrades to your liking!
• Bring across your powerful warrior to the next story upon each book’s conclusion!
• Cast powerful spells, including the ability to paralyze foes, turn invisible, hurl fireballs, and more!
• New, full-color artwork by Simon Lissaman and music by Ryan Grogan to accompany the interactive story.

• Read the book horizontally or vertically on your tablet.
• An automated Adventure Sheet to keep track of stats and inventory.
• Realistic physics based dice rolling. Shake your device!
• Artwork gallery. Find an illustration in the gamebook and be able to access it full-screen forever.
• Bookmarking system which saves your position in the gamebook, much like putting your fingers between the pages to remember your previous page when reading the paperback!
• Specially composed soundtrack and sound effects.