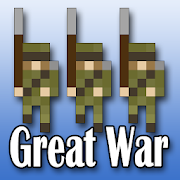 Pixel Soldiers: The Great War is simple to play, but difficult to master turn-based strategy game set during the First World War. You will choose to command the armies of either the Entente (France, Britain, and Russia) or the Central Powers (Germany, Austria and the Ottoman Empire).

You will fight from 1914 to 1918 on the Western Front and Eastern Front. You will land on the beaches at Gallipoli, desperately hold or seize the important city of Verdun and try to achieve a breakthrough on the Somme.