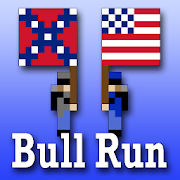 Pixel Soldiers: Bull Run is a tactical turn-based strategy game where you will command either the Union or Confederate armies during the first year of the American Civil War in 1861.

You will storm the mountain passes of West Virginia, make amphibious assaults along the Potomac River and fight pitched battles across a 19th century North America. Easy to play and difficult to master, Pixel Soldiers is a game for wargamers and casual gamers alike.

This game is set almost 50 years in the future from the previous Pixel Soldiers game (Pixel Soldiers: Waterloo).

BATTLES
Pixel Soldiers: Bull Run includes Union and Confederate campaigns, with historical scenarios leading up to the Battle of First Manassas (Bull Run) in the east, and Wilson’s Creek in the west…