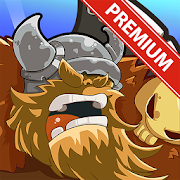 If you are a fan of tactical games, you can enjoy the addictive game Frontier Wars. You are ready to defend the monsters that attack your kingdom. Choose your favorite hero and lead your army in this offline strategy game.

▶Tower Defense game with unique gameplay
Unlike other strategy games, Frontier Wars have different gameplay with control hero and summon troops to defense your castle. The world in the Frontier is a fantasy world, where your kingdom is being attacked by dark forces: zombies, orc, demons, … Your mission is to become a hero, upgrade troops and castles and defend against attacks from enemies.

▶Build, Upgrade, Summon and Defend
In Frontier Wars, you will choose to build one of the three ancient kingdoms: humans, gods, or elements. Each kingdom will have different power and troops, upgrade the army and summon the guardians to fight in the battle against the enemy.

▶Summon heroes, use magic items
Each kingdom has special heroes to match each different battle, you will need to use the right heroes at the right time to promote their ultimate power. Besides, you are always ready to get help from a magic support item to help you fight the darkness.

▶Offline tactical tower defense game without a network connection
Frontier Wars is an offline game so you can play it anytime, anywhere without connecting to the network or connecting to wifi.