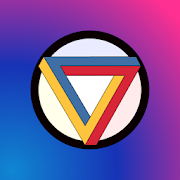 🌟Features
🔶Story mode with 36 unique Missions to complete and take over the world.
🔶3 infinite game modes, each one with different controls and mechanics:
🔸Rotating Triangle: Rotate and match the color with the side of the triangle to destroy objects.
🔸Moving Triangle: Move and explore an open world to destroy more stuff.
🔸Teleporting Triangle: Teleport in time with precision to destroy and survive.
🔶10 abilities to unlock by destroying enough objects.
🔶Multiple themes to unlock by completing different tasks.
🔶Detailed game statistics to share and compete with your friends.

ℹ️About the application
It’s an offline game, can be played without an internet connection.
It’s an indie game(created by a single person).
The game does not require any special permission.