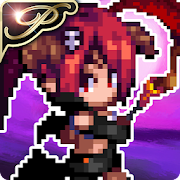 The Underworld… A terrifying world of pandemonium, where desires swirl around and demons make their home.

Hadjane is the super-strong Queen who rules over the Underworld.

Hadjane has the most power in the whole of the Underworld… But she always does just as she wants, and always, always has to have her own way!
Sometimes she works her minions to exhaustion, punishing them severely and treating the demons harshly… Other times, she passes time doing just as she pleases: eating, drinking, and sleeping!
For Hadjane, every single day is like this. Finally, the demons can put up with it no more, and raise a rebellion larger than anyone’s ever seen!

Hadjane flies into a crazy rage at this captures the demons trying to escape, and punishes the rebels until they’re black and blue while working them ragged!

Features
– Unleash the Queen’s domination!
– As Hadjane, the ruler of the Underworld, deliver fierce punishments to rebellious minions!
– Easy level ups through auto battle!
– Minions increase as you clear stages!
– Craft fiendish weapons!
– Various worlds and stages with conveyor belts, slippery floors, bursts of flame, and more!
– So many achievements to complete!
– A board game, and a host of unique enemies!

* This premium edition offers 1000 bonus Rainbow Karma + convenient item set!
* The game can be played in its entirety without the need for in-game transactions.
* This app supports the Safe Save, enabling data to be backed up and moved between devices. However, please note that data cannot be transferred between devices with different OS, or between the free and premium versions of the game.