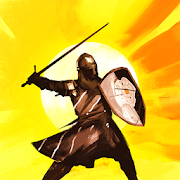 King Tactics - The Wars of the Roses

King Tactics – The Wars of the Roses

The King is dead! The Houses of York and Lancaster both see themselves as legitimate heirs to the crown and fight bitterly for power. Join your troops in the historic battles of the Wars of the Roses and conquer England!

Can you win the battle? Prove yourself as a clever commander and put your tactical skills to the test. Just like in the legendary “The Rose King” board game, you can develop a good strategy to defeat your opponent and stand your ground on any battlefield!

Place your knights skillfully, send your troops out and conquer as many connected areas as possible. Obstruct your opponent, thwart their plans and break their ranks.
Play against resourceful computer opponents, friends, or challengers from all over the world in challenging duels!

The game:
• Strategy game for one or two players
• Just a few rules – thrilling right up to the last move
• Easy to get started: Become a battle-hardened knight quickly.
• High score list: Battle your way to the top of the ranks.
• A game based on the KOSMOS “The Rose King” board game by Dirk Henn

Game modes:
• Campaign: Master all the battles of the Wars of the Roses in historical order.
• Free game: Play against the AI in three levels of difficulty.
• Online multiplayer: Play online against friends or against other players from all over the world.
• Offline multiplayer: Play with a friend on a device and experience a real board game feeling any time and anywhere.